SO WHY TEACH GRAMMAR AT ALL? 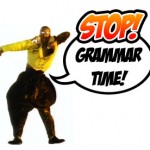 In the past few weeks there has been quite a brouhaha about the fact that the final draft of the CAPS suggested that grammar virtually be dropped from the FET HL curriculum.  Since then, it has been indicated that this proposal has been reversed as a result of protests from various quarters – hats off to the coordinator of this particular CAPS and the Education Department for their being prepared to listen and amend. In view of all this,  it is perhaps a good idea to ask why it should be taught in the first place. After all, if it serves no purpose, then it might as well be dispensed with.

The reason usually cited for the teaching of grammar is that it helps people to learn and use the language.  There are those who refute this, pointing out that children learn language by hearing and using it, not by learning explicit grammar rules.  In this respect, they are right. And (if they knew about him), they would refer to Noam Chomsky, the great American linguist, who maintains that children are born with an innate ability to learn a language, that they intuitively extract the rules from the data to which they are exposed. A small child, for example, will learn how to form plurals and past tenses from what they hear around them.  A test, for example, has shown that, when children were given made-up nouns and asked to say what more than one was, they used the normal rule (adding –s or –es).  Similarly, when given made-up verbs, they would add –ed to indicate that the action had occurred in the past.   In each case, they would also make the error of overgeneralising for a while – ie, using the general rule for exceptions – but, with correction, would learn to deal with these. Which goes to show that they do not learn each word and its plural/tense changes separately, but extract the rules.

On these, grounds, it is therefore argued that there is no need for children (or anyone) to learn the explicit rules of the language.  This, however, is not true.  There are obviously certain things that not all children will pick up intuitively – eg the use of the apostrophe. And, where children are learning a second language, they will not necessarily acquire rules which contradict or do not exist in their own language (eg subject-verb concord, which applies to English but not to Afrikaans or, say, isiXhosa).  Furthermore, knowing the explicit rules allows people to reflect on their usage, to consult texts about what is acceptable usage, and to refine their style.  Sometimes – particularly with style – it is merely the fact that they are aware of the medium and not just the message that they are able to improve their style.

There are those, however, who would argue that, apart from a few rules needed for ensuring correct usage, there is no proof that knowing the rules does in fact result in a greater degree of correctness.  There have been experiments which have purported to justify this view.  However, they are often flawed; and there is no proof that it does not assist. I once also came across an argument – not particularly academic, but nevertheless convincing – that an established tradition such as the teaching of grammar should not lightly be abandoned. Not to say that, just because it has been done for so many years it must not be questioned; but to say that one needs clear, clear evidence of its lack of value in this respect to consider abolishing it.

That said, I believe that, even if it were possible to prove that the learning of grammar has little or no practical value, there is a further argument for teaching it. Let me start be asking the following questions:  How much of what is taught in, say, Maths, Life Sciences, Geography, History, has practical value for those who take these subjects?  Does one really need to know how the lungs work in order to be able to breathe? Does one need to know that the French Revolution was about human rights to be able to deal with human rights today? Obviously, knowing all this enlightens one, makes one ‘more educated’; but life would go on merrily without this knowledge. So why bother?  The reason is that one ought to know how things work or happen for their own sake, for having an understanding of the world in which one lives. What always amazes me is that no one (other than many pupils) says that these subjects should be eliminated from the curriculum or should be pared down to the essentials because their value for practical reasons for most people is limited. So why, I ask, should it be that the study of language (and here I mean the study of how language works, not merely the study of literature, or the development of language skills) is not accorded the same status? In fact, I believe it could be argued that it should be given superior status. After all, it is language that most makes human beings different from other animals or creatures. It is a fascinating subject if one sees it as a study of how language works rather than as a set of rules for ensuring correct usage. It therefore deserves to be regarded as a discipline in its own right, not merely as an adjunct to literature, reading, etc.